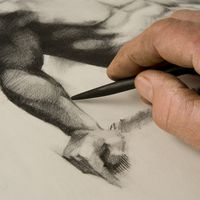 Jon Mumford
Jon Mumford is a sketch artist and educator with 20 years of experience. Creator of Drawing Pencil Sketches, an online tutorial for all skill levels.
Learn about our Editorial Process

Unfortunately, the art world has been historically dominated by men, and women artists are seldom mentioned despite their enormous contributions. It is important that women artists are also recognized as part of the canon, though, for their work is also of superior and enduring quality, and some even achieved success in their own day despite great societal obstacles.

There are several factors that would determine if a particular artist makes the list. One of them is the trend and fashion of the moment that the artist lived, another is the longevity of an artist's popularity. The impact made by an artist on his contemporaries is yet another factor to consider. In the long run, determining who are the greatest artists of all time may be a subjective opinion; however, based on public opinion and what the museums say, the 10 best visual artists of all time are:

Michelangelo is regarded as the greatest sculptor and painter of all time. He was a major figure of the Renaissance in Italy, especially in Florence and Rome. Even today, some of his marble carvings have a flawless beauty.

Michelangelo is popularly known for the Italian Renaissance sculpture as well as the Sistine Chapel frescoes, among other incredible works of art.

Rembrandt is a Dutch painting genius who created several masterpieces. Rembrandt is particularly renowned for his passion for history painting and still life portraits. He made several canvasses famous for their emotional content, which is why Rembrandt was branded as a realist painter.

Pablo Picasso, the founder of cubism, is one of the most influential artists in history. He was a sculptor, printmaker, painter, and ceramicist. He produced several of the greatest paintings of the 20th century. Born to a painter father, Picasso received all the needed encouragement to build a successful painting career. This gave him the privilege to study art in some of the finest art schools in Spain.

He was among the 250 sculptors who exhibited the 3rd Sculpture International held in America. His style and technique was exceptionally prolific throughout his lifetime, producing a total number of 50,000 artworks, including drawings, paintings, and sculptures, among others. Of all forms of art, Picasso excelled most in painting.

Leonardo was born in Florence, Italy. Despite living several centuries ago, he still remains one of the most influential artists of all time. His only training was in the field of science and he was apprenticed at an early age to a renown Florence painter of the time. Leonardo was regarded as an intellectual in his lifetime because of his passion for science.

Leonardo's contributions to the art world were small, but two of his paintings are the most popular today: "Mona Lisa" and "The Last Supper," which is the only surviving fresco of Leonardo da Vinci.

The fact that his interest ranged beyond art could have been the reason why his input was very small. In his lifetime, so engrossed was he in physics and mechanics, that he created workable artistic designs for bicycles, among other things.

This is what is popularly believed to be the cause of his failure to complete several of his paintings and art projects. There are also credible reports that he spent a significant amount of time thinking and testing scientific laws, as well as writing his observations about them.

Claude Monet is popularly regarded as the founder of French Impressionist painting. Monet had an incredible passion for documenting the countryside in his numerous paintings. This was the birth of his impressionist paintings. When Monet went to Paris, he observed several artists copying the popular works of other artists. Rather than follow this trend, Monet developed the habit of sitting by an available window and painting what he saw.

Gradually, Monet became popular for his impressionism. He influenced several young artists and made them commit to impressionism, and within a short period of time, Impressionism became a popular form of painting in Paris. Sometime in 1874, the first impressionism exhibition took place in Paris. In that exhibition, Monet presented a total of 12 artworks, which included five paintings and seven pastels.

Born in the Netherlands, van Gogh was a remarkable painter whose works of art are still sold at unbelievable prices across the world today. His contribution to art was basically painting. He created many still-life paintings, several of them were portraits of friends and acquaintances. In all, van Gogh completed about 800 paintings. One thing that distinguished him as a painter was his grasp for color relationship and unique brushwork. His work is still a great source of inspiration for several impressionists all over the world.

Rodin was a workaholic and a dedicated sculptor. He is a worthy successor to great minds like Michelangelo. Rodin is popularly considered the best sculptor of the modern era. His success is derived from his ability to model stone and clay in complex manners. During his lifetime, Rodin earned a living collaborating with established sculptors on several projects.

He is one of the most remarkable Northern Renaissance artists and many of his works are greatly copied today. Aside from working for the court, van Eyck produced several paintings for private clients. One thing that was peculiar to him is that he was the only painter in his era to sign his canvasses.

Donatello is regarded as the greatest sculptor of the 15th century. He was no doubt one of the best artists of that era. He was very skillful with wood, terracotta, and stone.

Peter Rubens was the most influential figure in counter-reformation baroque art. His contribution to art was basically paintings; however, he produced almost all possible genres of paintings. He was very versatile, producing cartoons and book illustrations as well as sketches for metal work and sculptures.

Vigée-Le Brun was one of the most renowned portraitists of 18th century France and the most famous woman artist in Europe. Through talent and perseverance, she achieved success in one of the most turbulent periods of French and European history and became one of Queen Marie Antoinette's favorite painters. She painted more than 20 portraits of Marie Antoinette, along with portraits of other European aristocrats, actors, and writers, primarily women. She was elected to art academies in 10 different cities. She created over 900 paintings in her lifetime, including roughly 600 portraits and 200 landscapes.

Georgia O'Keeffe was one of the most important and successful artists of the 20th century. She was one of the first American artists to embrace abstraction and became one of the leaders of the American Modernist movement. Her art is personal and innovative. She is known for paintings of large abstract flowers, dramatic New York skyscrapers, and southwestern landscapes.