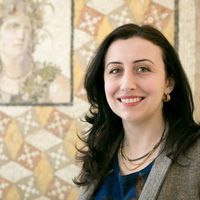 Danielle Oteri
Danielle Oteri is a writer, museum consultant, and art historian. She is also the founder of a tour company that helps travelers plan trips to Italy.
our editorial process
Danielle Oteri

If you're even a casual fan of Impressionist art, you may have seen Edgar Degas's "Little Dancer of Fourteen Years" sculpture at the Metropolitan Museum of Art.

And the Musee d'Orsay. And the Museum of Fine Arts, Boston. There's also one in the National Gallery of Art in Washington, D.C., and at the Tate Modern, and many, many other institutions. Altogether, there are 28 versions of the "Little Dancer" in museums and galleries around the world.

So if museums always display original (and often priceless) works of art, how can this be? Which one is the real one? The story involves an artist, a model, a bunch of really angry critics, and a bronze foundry.

History of the "Little Dancer" Sculpture

Let's start at the beginning. When Edgar Degas became interested in the subject of ballet dancers at the Paris Opera, it was considered controversial as these were girls and women from the lower classes. These women were comfortable with showing off their athletic bodies in form-fitting clothes. Moreover, they worked at night and were usually self-supporting. While today we consider ballet to be a highbrow interest of the cultured elite, Degas was controversial for putting a spotlight on women that Victorian society considered to breach the bounds of modesty and decency.

Degas began his career as a history painter and never fully embraced the term Impressionist as he consistently thought of himself as a Realist. Although Degas worked closely with Impressionist artists including Monet and Renoir, Degas preferred urban scenes, artificial light, and drawings and paintings made directly from his models and subjects. He wanted to portray everyday life and authentic movements of the body. In addition to ballet dancers, he depicted bars, brothels, and murder scenes—not pretty bridges and water lilies. Perhaps more than any of his other works depicting dancers, this sculpture is a rich psychological portrait. At first beautiful, it becomes slightly unnerving the longer one gazes at it.

In the late 1870s, Degas began to teach himself sculpture after a long career working in paint and pastels. In particular, Degas worked slowly and deliberately on a sculpture of a young ballet dancer using a model that he had met at the Paris Opera's ballet school.

The model was Marie Genevieve von Goethem, a Belgian student who had joined the Paris Opera's ballet company as a means of getting out of poverty. Her mother worked in a laundry and her older sister was a prostitute. (Marie's younger sister also trained with the ballet.) She first posed for Degas when she was just 11, then again when she was 14, both in the nude and in her ballet clothes. Degas built the sculpture out of colored beeswax and modeling clay.

Marie is depicted as she likely was; a girl from the poorer classes training to be a ballerina. She stands in fourth position, but is not especially poised. It's as though Degas captures her in a moment during a routine practice rather than performing on stage. The tights on her legs are lumpy and pilled and her face pushes forward in space with an almost haughty expression that shows us how she is trying to hold her place among the dancers. She is brimming with forced confidence and gritty determination. The final work was an unusual pastiche of materials. She was even dressed with a pair of satin slippers, a real tutu, and human hair mixed into the wax and tied back with a bow.

The Petite Danseuse de Quatorze Ans, as she was called when she was first exhibited in Paris at the Sixth Impressionist Exhibition in 1881, immediately became the subject of intense praise and disdain. Art critic Paul de Charry praised it for "extraordinary reality" and deemed it a great masterpiece. Others considered art historical precedents for the sculpture in Spanish Gothic art or ancient Egyptian works, both of which utilized human hair and textiles. Another possible influence may come from the formative years Degas spent in Naples, Italy, visiting his aunt who had married Gaetano Bellelli, an Italian baron. There, Degas could have been influenced by an abundance of sculptures of the Madonna that had human hair and cloth gowns, but who always looked like peasant women from the Italian countryside. Later it was surmised that maybe Degas was winking at Paris society and the sculpture was actually an indictment of their views of working class people.

The negative reviewers were louder and ultimately most consequential. Louis Enault called the sculpture "quite simply hideous," and added, "Never has the misfortune of adolescence been more sadly represented." A British critic lamented how low art had sunk. Other criticisms (of which 30 can be assembled) included comparing the "Little Dancer" to a Madame Tussaud wax figure, a dressmakers mannequin, and a "semi-idiot."

The "Little Dancer's Face" was subjected to especially brutal scrutiny. She was described as looking like a monkey and of having "a face marked by the hateful promise of every vice." During the Victorian era the study of phrenology, then a very popular and widely accepted scientific theory purported to predict moral character and mental abilities based on cranium size. This belief led many to believe that Degas gave the "Little Dancer" a prominent nose, mouth, and receding forehead to suggest she was a criminal. Also in the exhibition were pastel drawings by Degas that depicted murderers, which bolstered their theory.

Degas was making no such statement. As he had in all of his drawings and paintings of dancers, he was interested in movement of real bodies which he never attempted to idealize. He used a rich and soft palette of colors, but never sought to obscure the truth of his subjects bodies or characters. At the end of the Paris exhibition, the "Little Dancer" went unsold and was returned to the artist's studio where it remained among 150 other sculpture studies until after his death.

As for Marie, all that is known about her is that she was fired from the Opera for being late to rehearsal and then vanished from history forever.

How Did the "Little Dancer" End up at 28 Different Museums?

When Degas died in 1917, there were more than 150 sculptures in wax and clay found in his studio. Degas' heirs authorized that copies be cast in bronze in order to preserve the deteriorating works and so that they could be sold as finished pieces. The casting process was tightly controlled and organized by a distinguished Paris bronze foundry. Thirty copies of the "Little Dancer" were made in 1922. As Degas's legacy grew and Impressionism exploded in popularity, these bronzes (which were given silk tutus) were acquired by museums worldwide.

Where Are the "Little Dancers" and How Can I See Them?

The original wax sculpture is in the National Gallery of Art in Washington, D.C. During a special exhibition about the "Little Dancer" in 2014, a musical which premiered at the Kennedy Center was made the model as a fictional attempt to piece together the rest of her mysterious life.

The bronze castings can also be seen at:

Ten bronzes are in private collections. In 2011, one of them was put up for auction by Christie's and expected to fetch between $25 to $35 million. It failed to receive a single bid.

In addition, there is a plaster version of the "Little Dancer" that continues to be debated as to whether it was completed by Degas or not. If an attribution to Degas is more widely accepted, we may have another Dancer poised to enter a museum collection.