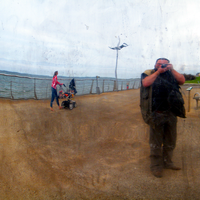 Bernd Biege
Bernd is a travel writer from Germany who has lived in Ireland since the late 1990s and written several German-language tourism guides to the country.
our editorial process
Bernd Biege

Ireland become a republic during the Easter Rising, after the Anglo-Irish War, or after the Irish Civil War? It is clear that the non-UK part of Ireland today is an independent republic, but noone seems to be quite sure when this officially occurred. There really is a lot of confusion about the exact date, in a great part due to the very confusing Irish history and the unilateral, somewhat optimistic and premature proclamation of a republic in 1916. Add a number of important dates and you may still struggle to pinpoint when Ireland became a republic. Here are the basic facts you need to know:

From Part of the United Kingdom to Republic

The steps leading to Ireland, which was still a part of the United Kingdom in the early 20th century, becoming a republic are best outlined in a quick list of important events:

Then came the Republic of Ireland Act 1948, which declared Ireland to be a republic, plain and simple. It also gave the President of Ireland the power to exercise the executive authority of the state in its external relations (but only following the advice of the Government of Ireland). This act was actually signed into law in late 1948 but only came into force on April 18th, 1949—Easter Monday.

Only from this moment on could Ireland be regarded as a fully fledged and totally independent republic.

As the whole process leading to the Republic of Ireland Act already made most of the important changes and also established a constitution, the actual text of the act was very short indeed:

As a final note, the Constitution of Ireland still has no passage implying that Ireland actually is a republic. Some dissident republicans deny that Ireland has the right to call itself a republic until Northern Ireland is reunited with the 26 counties of the so-called South. This campaign has been renewed by some following Brexit, which means that Northern Ireland is no longer a part of the European Union, while the Republic of Ireland remains an active member of the EU.